Maryel School complies with all mandates from the New York State Department of Education to offer a program of academic excellence for grades Pre-Kindergarten (3 and 4 year olds) through 5th Grade. In addition, we provide a high quality bilingual education for a second language acquisition following the rigorous educational system of one of the most prestigious academic models in Europe. (Spain), which includes formal instruction in Spanish, international awareness, advanced technology in the classroom and cultural events.

With a student teacher ratio of 5:1, teaching is relevant and flexible, enabling students to remain motivated and achieve their full potential. This ratio allows our teachers to give the individual attention that each student and family deserve.

Strong and constant communication between parents and school, and many opportunities for parents to be involved in their children education make Maryel a strong community where parents, students and educators work together for the students’ success and growth.

What is the theory of multiple intelligences? 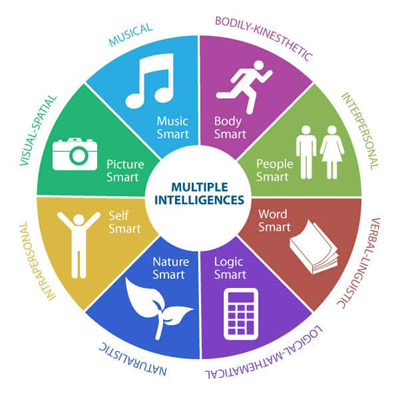 What are these intelligences? What do they mean?

We all possess eight different types of intelligences.

· Visual-spatial intelligence, “picture smart”, describes the ability to manipulate and create mental images in order to solve problems and reason, to visualize concepts and space.

· Musical intelligence, “music smart”, involves skill in the performance, composition, and appreciation of musical patterns. It encompasses the capacity to recognize and compose musical pitches, tones, and rhythms.

· Naturalistic intelligence, “nature smart”,  refers to the ability to identify and distinguish among different types of plants, animals, and weather formations found in the natural world.

· Intrapersonal intelligence, “self-smart”,  refers to people’s ability to recognize and assess those same characteristics within themselves.

These intelligences, although separate, work together, in an infinite number of combinations, in each of our learning experiences.

Gardner sustains that although we all possess these intelligences they do not develop in the same way and at the same pace in every individual. Some may “by nature” be stronger and more dominant than others at any given time of our evolution, but all can be strengthened.

What effect does this have in learning and education?

Although educational practices and theory are in constant evolution, many school systems still have a tendency to value linguistic and logical-mathematical abilities over others. An important part of the learning is geared towards developing those areas, or presented in a way that resonates more to and relies in greater part on the abilities of a linguistic/ logical-mathematical mind.

As a result of this, children who have a more dominantly linguistic/ logical-mathematical mind tend to do better in most traditional school systems, having their abilities being reinforced and having learning experiences that resonate with how they specifically process information. At the same time, children who show other sets of strengths, often for example related to the arts, receive much less reinforcement of their skills and  a learning experience that does not always resonate with or allow them to use their abilities.

By applying the theory of multiple intelligences in the classroom, educators take into consideration the different types of learners they might have in their class, reinforce all types of intelligences in every student, and allow for an individual learning process that will ultimately enable each learner to utilize his or her specific abilities and demonstrate learning.

Presenting topics using the theory of multiple intelligences, that is using different pathways and tools to study information, have a very positive effect on our students’ learning experience. Incorporating for example, role play, collaborative work, music, activities using our bodies or field trips allows for a learning experience that will not only allow different types of learners to learn but will enrich every individual’s understanding of the topic.

Giving our students the chance to discover and develop their different intelligences have a series of benefits for our students; from fostering new talents to becoming more involved and active learners; developing their capacity to recognize, and almost more importantly value their individual strengths; or guiding them into becoming confident, successful and accomplished adults in their field of choice.

“Everybody is a genius. But if you judge a fish by its ability to climb a tree, it will live its whole life believing that it is stupid.” –  Albert Einstein.