Testimonials from Our Families

The following parent testimonials have been recently provided by parents whose sons and daughters have attended or currently attend Maryel School.

HHHHH—“Hi, I’m Mendy. My son Thomas is a first-grader at Maryel School of New York. We have been part of the Maryel family since he was three years old. We love the nurturing and warm environment and community that the school provides. Maryel offers a strong, diverse curriculum, but what I think is so important is that parents and teachers work as a team in the education and development of our children. I highly recommend Maryel and know that your family will be as happy as we have been”.

HHHHH—“We have two children in Maryel. Our daughter has been there for four years now. She’s in Kindergarten. Maryel is a very warm, caring, and challenging environment. What initially drew us to Maryel is the small student body. With a small community, each child gets a lot of attention and obviously the bilingual aspect. The teachers have been wonderful and myself, I don’t speak a word of Spanish, but I am amazed every time my kids come home and can understand it perfectly, can be happy watching TV in Spanish, speak Spanish, sing songs in Spanish, and it’s just been wonderful to see someone in my family, two little ones in my family, learn a new language.”

HHHHH—“We have been at Maryel for 5 years now and we absolutely love the school. Our three children are thriving. The academics are top-notch! The language immersion program is very effective and all three are bilingual. Most importantly Maryel is a second home for them. My kids are so happy to go to school every day and have developed a deep love for school and learning. The community of parents at Maryel is also a wonderful asset. We cannot say enough things about our school! We are so lucky and very grateful to be a part of the Marvel family.”

HHHHH—“As the mom of two bi-cultural children, it was of the utmost importance for me that my children learned not only my language but also my culture. I am so lucky to have found both at Maryel! My son is in first grade and is completely fluent in both English and Spanish. He is learning to read and write in both languages, doing math in both languages, and learning every subject in both languages. This approach enhances their little brains because they are learning to process all types of knowledge in both languages and through the lens of both cultures.
We are extremely lucky to be at Maryel, and can’t say enough great things! Any child, whether they are bi-cultural or not, would greatly benefit from Maryel’s academic standards, culture and overall experience.”

HHHHH—“Maryel School is a wonderful, nurturing school with a rigorous and purposeful academic curriculum. While we don’t speak Spanish at home, it has been so amazing to see our son pick up the language through the immersion program. We also love that the school focuses on developing social and emotional intelligence as much as literacy, maths and science in the early primary years. The teachers are fantastic and the entire Maryel community has been warm and welcoming since Day 1. I would definitely recommend Maryel!”

HHHHH—“My granddaughters attend this school and they are learning a lot of interesting subjects including Spanish. I’m so grateful I can talk to them in my native language and they understand me!”

Appreciation Speech from the Ruccio-Arce Family at our End of Year Ceremony 2019. 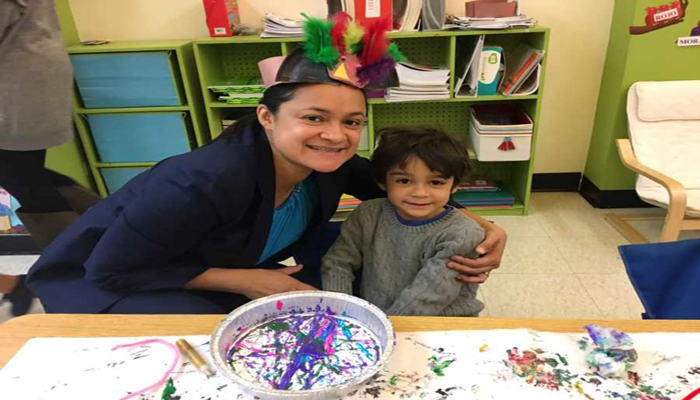 I am excited to be here celebrating the accomplishments of our children. Nine months ago, we started the 2018-2019 school year with great anticipation, but not quite sure what this new year would bring. Maryel changed its name, expanded its classrooms from the 2nd floor to the 1st floor, built a new gym, and painted the schools with new colors! Midway through the year, we were greeted with new rugs and even napkins showing off their new logo!

In the classroom, the Koalas started off the year, some barely knowing how to talk, to learning the alphabet, colors, fruits, and shapes. Ardillas Class, already old pros at manipulating the stairs, embarked on new adventures of learning numbers, writing their names, and socializing with each other. The Pre-K class, most of which had already spent 2 years together developed stronger ties with their friends, learned about countries, chess, math, to read – essentially, preparing them to start Kindergarten! How fast has this year gone!
It is because of this that I stand here with a heart filled with both happiness and sadness. I am so happy with the experiences my two children have had at Maryel but also sad, because as my family’s journey at Maryel comes to an end, I am faced with the reality that my youngest son Dante is definitely not a baby nor a toddler, and as of today, not even a pre-schooler!
Our family has been at Maryel for 6 years, the same number of years that Maryel has been open! I remember the very first day Maryel opened its doors. We were standing in what used to be the gym, but today is the Koalas classroom. I was nervous because I was there with my older son Theo. Was I doing the right thing to entrust my not-quite 2-year-old over to Maryel? Was this the right school for him? The school had just opened! There were no reviews online that I could rely on to tell me of other parents’ experiences here!
What I did know was that I wanted my son to learn Spanish. I had visited a number of schools before deciding on Maryel and had a list of requirements. Would my child learn Spanish? Did each classroom have windows? (Believe it or not, many pre-schools and schools I visited in the Upper East Side 6 years ago were in the basement or had no windows!). Did the school have a backyard so the kids could play without having to leave the school grounds? Check, Check, Check. Maryel checked all the boxes. At the time, I did not give much thought to the difference between play-based versus structure-based preschools. Now after my experiences with Maryel, I realize that I would have added that as another box to be checked!

On that fateful first day that Maryel opened its doors, Theo had no idea that he would spend the majority of his days in the brownstone for the next three years. As the classes lined up before their new teachers, with parents nervously standing next to their children, Celine gave a sweet but short speech of how excited she was to finally make her dream to open a bilingual school in NYC a reality. Upon ending her speech, she played the song “Buenos Dias ”. Everyone grew quiet as the children, the teachers, Celine, and the parents listened to the verses – “Buenos dias, Canto Yo, el sol dice hola la luna dice adios”. It was at that moment that I knew that Theo was going to be OK. I took comfort in the song, the children marched and followed their teachers up the stairs and on to their new lives, to not only learn Spanish but learn the alphabet, to count, to read, to develop friendships, and to become as prepared as they possibly could be for the rigors of academic life beyond Maryel not just in one but in two languages.
In the last 6 years, I have entrusted my two boys, both starting at the age of 2, to Maryel. The benefits that my children and I have gained here have far surpassed my expectations. Starting with
the relationship our children develop with their friends is second to none. Due to class size, by the time they reach pre-K, our children have developed strong bonds with their peers. Both Dante and Theo spent 9 hours a day at this school from 8am – 5pm. Impossible that they not form deep ties, playing to their heart’s content and most importantly, speaking Spanish.
I enrolled my children here for ONE main reason and that was so that they would be fully immersed in Spanish. What I did not realize was that in addition to learning Spanish, my children were also being motivated to learn starting at the age of 2. More than learning a language here, our children are put in an academic setting that also happens to be taught in another language. I was always amazed by what Theo or Dante would say next. One day, Theo came home and read a book to me in Spanish. I did not know he could READ, much less that he could read in Spanish! Or the time when Dante randomly piped up to tell me about the 7 continents or about the 5 boroughs and that Ms. Mercy lives in Brooklyn or that the Andean Condor is the largest flying bird in the world! That could only come from the amazing teachers here at Maryel.
The relationship that the parents develop with each other. I cannot say enough about this – I treasure the close ties I have developed with many moms in both Theo’s and Dante’s classes. I have learned so much from each mom, sharing our experiences makes me feel better that I am doing OK at this challenge called Motherhood. I hope and imagine that these relationships will last far beyond today’s graduation.

Last but not least, the teachers – Celine, no se como lo haces! I don’t know how you do it, but in the 6 years that I’ve been here, you have always hired outstanding teachers. Starting with Stra Nina and Ms. Jeanette 6 years ago! They nurtured Theo and ensured that he had the skills necessary to move on and excel at one of the best public schools this city has to offer. In the last 6 years, there has not been one teacher that I have regretted. Each teacher has been dedicated to our children, instilling the love of learning, not only the language but also in electives such as chess and music. Because of Maryel, Dante requested to own his own guitar and is now taking lessons! Dante, along with his classmate Jackson, participated in a chess tournament due to Ms. Mercy’s teachings in the classroom. They are only 5 years old! The Maryel teachers are the heart of this school. Keep picking them the way you have Celine and you will continue to have great success.
To that end, the Parent Council would like to say a special thank you to each of the teachers that make this school the place it is. Srta. Elvia, Srta. Ana, Srta. Ariany, Srta. Rocío, Srta. Mercy and Ms. Angie – Please stand. This is a surprise for them.

We would like to take this moment to present the teachers with a small token of the school’s appreciation. Parent Council.
Teachers, Thank you for your hard work, your commitment to the students, the endless love you share with them, and the education you are imparting to them. Angie – thank you as well for your endless support. Always being available to answer questions, help organize our events, your weekly updates, and for being the first person we see when we arrive at the school. Everyone, let’s give them a warm round of applause.